​Our Committees and Projects

​Louis Joliet Chapter NSDAR is involved in numerous committees and projects. Along with our historical preservation, educational and patriotic endeavors, we proudly participate in the following programs:

Our Service, Genealogy, and Administrative Committees 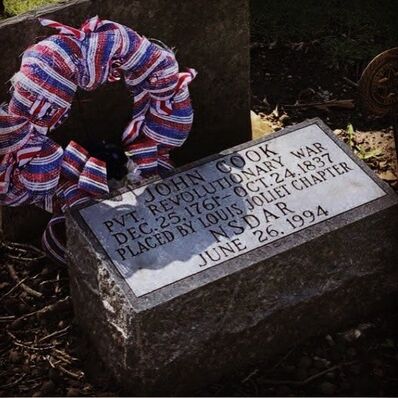 On May 4, 2019, Louis Joliet Chapter NSDAR members remembered three Revolutionary War patriots buried in Will county. A memorial wreath was laid at each grave to say thank you to three men for their service to the cause of the American Revolution.
​
John Cook’s gravesite is located in Oakwood Cemetery in Joliet, Illinois. John was born in New Jersey on December 25, 1761. In the summer of 1776, at about 14 years old, John entered the New Jersey Militia as a volunteer. He is best known for his courageous exploits in the Battle of Brooklyn which helped facilitate the Continental Army’s retreat. In June of 1781, John Cook joined the troops under General Lafayette, with a team of farm horses and a wagon, and continued in this service for about one year, and was present when Cornwallis surrendered after the Battle of Yorktown. John Cook relocated to Will county, Illinois, in 1832. On July 4, 1835, the town held a Fourth of July parade that was led by John Cook’s son, Major Robert Cook. John Cook, as a veteran of the American Revolution, was carried over the parade route on the shoulders of the men of the town. It was near Joliet, Will county, Illinois, that John Cook passed away on October 24, 1837, at the age of 75 years, 9 months, and 29 days.

Charles Denney’s gravesite is located in Pioneer Cemetery in Mokena, Illinois. Charles was born on December 25, 1759, in New York. At the age of 18, Charles Denney served a three-month term as a substitute for his father, John Denney. 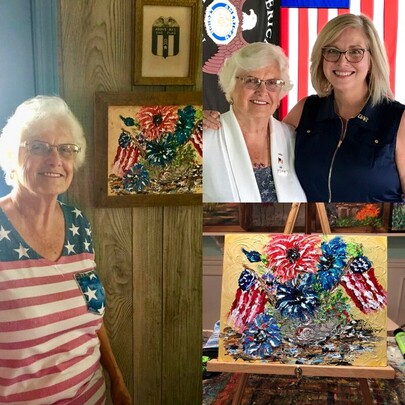 The DAR American Heritage Committee was established to preserve our rich American heritage in the fields of art and sculpture, crafts, fiber arts, literature and drama, and music. There are many ways our Daughters can contribute to the preservation of our American Heritage.

One of our members, Mrs. Bobbie Anderson Today, commissioned a painting to depict “Old Glory” for her mother, Mrs. Clara Goodin Sweet, also a new member of Louis Joliet Chapter NSDAR, to commemorate her 80th Birthday.  Old Glory proudly hangs in Mrs. Sweet's home and it is their hope that this gift will become both a family heirloom and a piece of Americana shared for generations to come.

About the artist: Tracy Bettencourt, owner/operator of Bettencourt Originals artist, advocate for persons with disabilities, speaker and Austin Peay State University (ASPU) alumni, began to lose her eyesight in her early 30's from an eye disease called Retinitis Pigmentosa. Although the disease has left her blind, the hardships she experienced have not prevented her from living her life to the best of her abilities. Within the past five years she began painting, using her hands. Her life is very structured and she uses a variety of assistive technology to identify and read colors. The paints she uses are textured acrylic and forms of puffy paint. Her hands are her eyes and the puffy paint allows her to convey her thoughts and feelings onto canvas using tactile lines. Every day she awakes and lives in darkness, yet with her newfound skill of painting she is able to share her unique perception of the world around her as well as conveying the unseen beauty of life. Her paintings reflect hope, adversity, love, positivity, strength and determination. She puts her heart, soul, and insight into every piece of her artwork. Every painting is one of a kind - a Bettencourt Original.
​THE CONTENT CONTAINED HEREIN DOES NOT NECESSARILY REPRESENT THE POSITION OF THE NSDAR. HYPERLINKS TO OTHER SITES ARE NOT THE RESPONSIBILITY OF THE NSDAR, THE STATE ORGANIZATIONS, OR INDIVIDUAL DAR CHAPTERS.
​UNLESS OTHERWISE NOTED,  IMAGES USED LICENSED UNDER CC ATTRIBUTION LICENSE AND WITH PERMISSION.
FOR QUESTIONS OR COMMENTS REGARDING THIS WEBSITE, PLEASE CONTACT THE   WEBMASTER.
Contact Us